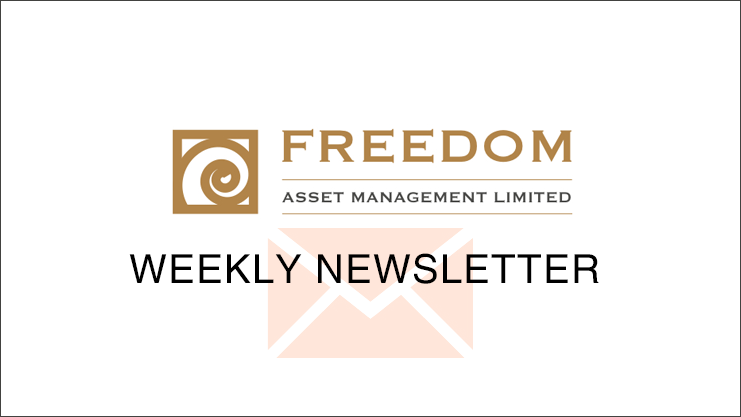 From the desk of CIO Simon Fentham-Fletcher

The month nearly over and our “feel-better” factor continues; again, weekly performance was positive c.+2% bringing the month and year to circa +8.5%.  Long may it continue!

Aston Villa’s manager is up for manager of the moth award, having taken them to top of the recent “form” league. It’s quite a shock to the system for any Villa fan to imagine that we might win an award for achievement.  So used are we to being the kid that picks up the “participation” award.  Villa fans know only too well how to lose, we are starting to find it strange understanding how consistently winning feels like.  Expectations have been raised; we are all wondering if we should pinch ourselves.

There is a joke, “3 New York ladies of a certain age are at dinner when the waiter walks up and says ‘Ladies …is anything alright?”

This reminds me of the way the UK seems to feel about itself.  Since Brexit we haven’t found our identity yet.  There seems to be a lack of confidence and that saddens me.  Life is about making the best of the path we are on, even if we do not like how we got there.

The trait that am starting to see more and more is blaming anyone and anything else for not doing or achieving something.  The nexus of control lies within us and being able to alter our future in a positive way is possible.  I say it again… the Sandroyd school motto “Niti est Nitere” or “to strive is to shine” should be branded into the UK subconsciousness.

The EU continues to be a strange enigma and its inferior performance has a lot to do with the ECB being so late to the party they almost got the month of the party wrong.

The Eurozone December money numbers were dreadful. M1 barely rose at all on the year (yoy) and has been shrinking since July; M2 slowed to +3.7% yoy, below trend; M3 slowed to 4.1% and yes you guessed it was below trend.  These numbers mean the monetary conditions indicator for the eurozone (money, real interest rate, yield curve, FX change), is now in the steepest decline since 2008.

A key development was the -0.3% mom fall in credit to the private sector, the final link in a long chain of gradual credit retreat imposed by the ECB.  ECB started shrinking its balance sheet in June last year, tentatively at first, but with gathering conviction.  In December, it shrank by Eu515bn, and in the first three weeks it was down a further Eu185bn.  In yoy terms, it has around Eu850 fewer assets on its books in Jan 2023 than it did in Jan 2022.

And how is the ECB trying to stop this potentially disastrous situation?  Well, you guessed it again, it isn’t.

Instead, because it was more than a day late and a dollar short of even incompetent action it must continue with what it knows is too extreme a policy.  As such, the ECB keeps shrinking its balance sheet too fast and by too much, so the private sector will be forced into actual deleveraging.  Expect to discover zombies.

This is the awakening that I have been talking about for many a Monday letter and has both bad and good points. We love the better allocation of capital it allows, what we hate is the impact it will have on the EU macro data, then corporations and then jobs.

This is why out allocations above are so underweight Europe. Any recession in the EU is in large part due not only to an energy problem but also lies at the doors of the ECB.

In short, the news was worse in number than good this week. Let us do the bad first:

And the good news, well the list was a little shorter, but in areas that are arguably more significant:

The world regions in three charts – all down this week…